Rampur is comparatively a smaller Royal estate in the foothills of Northern India adjacent to Nanital but unlike its size it is known more for its royal epicurean history of its nawabs. A cuisine which has its own characteristics that define its existence in the diverse Indian culinary heritage. Rampuri food a cuisine which hasn’t garnered worldwide recognition unlike its counterparts is one of those special cuisines that are a must try for every Indian food lover. The rich spicy taste of rampuri dishes at times leave behind even the best of Awadhi, Kashmiri, and Mughlai or Hyderabadi dishes.

This July Taj Lands end brings to you The Rampuri Food Festival in its signature Indian fine dining restaurant Masala Bay in collaboration with Chef Mujeeb ur Rehman from the Kitchen E Awadh Fame. Kitchen E Awadh was founded in 2000 by Chef Mujeeb-ur-Rehman a dynamic personality with over one & a half decades experience in innovative culinary skills. He is a master of Indian Royal cuisine. He has worked with various leading hotels in India and abroad where he has dished out exemplary delicacies made possible by his extensive research on North West Frontier cuisine, Awadhi, Rampuri, Hyderabadi, Kashmiri (Both Wazwan & Pandit Version) and Mughlai (Old Delhi Food).

The menu designed especially for masala bay is an expansive menu meticulously planned for vegetarians and non-vegetarians both to give them a complete dining experience. You can indulge in some of the best Nawabi dishes of Rampur like the Mahi Dum Pasanda, Sambhali Seekh Kebab, Nawabi Murgh Tikka, Mutter ke kabab, Tar Korma, Murgh Chungezi, Murgh Begum Bahar, Paneer Noor Mahal, Yakhni Pulao and many more 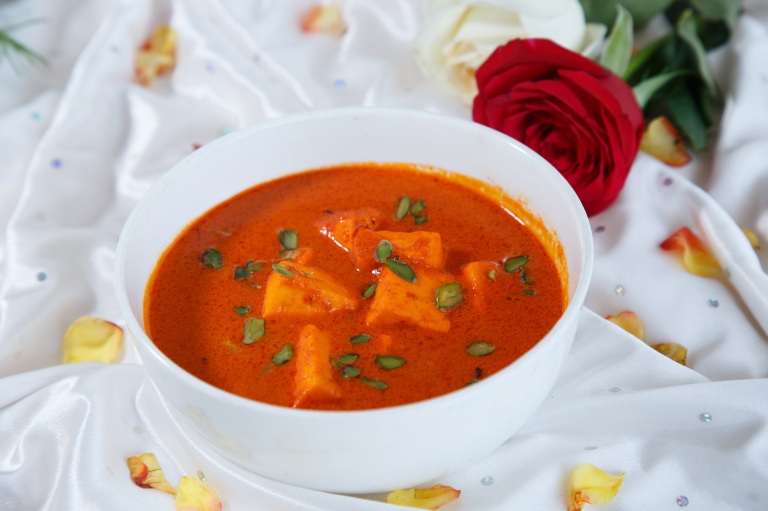 We being the hardcore non vegetarians directly attacked at the non-vegetarian section of the menu. In starters we absolutely loved the Nawabi Murgh Tikka consisting of Garlic flavoured cubes of chicken marinated overnight with mustard oil, lemon juice & aromatic spices because of the texture of the meat and the flavour infused due to the marinate. The Mahi Dum Pasanda consisting of Fish Chunks marinated with turmeric, various spices and herbs was fried in a way that it retained its pink colour on the inside was top notch. In mutton we had the Sambhali Seekh kabab hailing from the sambhal region of Rampur where delicate lamb skewers were perfectly spiced and went well with the Beetroot dip served with it.

In main course we tried the Ittr Ke Dal. A very simple dal that was prepared with milk, cream, ghee and some sweet essence that went well with rice. The Murgh Begum Bahar A Light brown coloured chicken preparation with cashew nuts, fenugreek and yoghurt in special copper utensil called LAGAN to retain the essence of spices and herbs was one of the best dishes of the night owing to the flavour of the thick gravy of this dish.

The Taar Korma a delicate mutton recipe from the royal kitchen of Tajdaar, mild, creamy, rich and fragrant with hints of spice, slow cooked to perfection a dish mutton lovers better not avoid at any cost.

The Yakhni Pulao made us fall in love with its simplicity. In desserts the Sheer Korma, Gur Ke yaquiti & chukander e afroz all were unique in its respective sections.

Masala Bay needs no introduction or verdict from me as it is one of the must visit Indian restaurants in Bandra. This festival curated by Chef Rehman is not be missed as it introduces you to a cuisine that you may not have experienced in town. A meal for two can hold you back by Rs4k but that is the average price for fine dining restaurants in high end hotels. We loved our experience here and would to come back for other festivals as well